So this is last day in the Bungalow hostel and so spend the morning chilling there using the computers and doing some admin. Needing to switch hostels I head over about 2ish jumping in a taxi as it’s a long walk in the heat, so that I can quickly dump my bags and head out to downtown for the afternoon.  Most people from the bungalow hostel were also leaving today like the Spanish guy Fran, Sebastian the Denmark guy in our room and the two young lads Sam and Dan or well for them they thought they were leaving but got their days mixed up so tried to leave a day early, which i thought was quite funny.

So with a pretty easy route to downtown just needing to get the red line to Union Station, it doesn’t take too long. Told to check out Union Station, I head out the wrong way and for the next 20 minutes walk about where there are no people around and it feels very empty for such a big city. Heading to china town initially, I end up not going there as spot a cool little street Olvera Street. It is bustling with people, which is a nice change from having no-one around before and has a a friendly feel to it reminding me of Spain as the street is full of little stalls selling Spanish / Mexican gifts. There are some random things there like horse hoof water bottles that I’m not too sure about, as looks ugly but there are normal things likes bags, purses and clothes. The street is full of taco places too, which look amazing and all are busy. There is a main restaurant on the street where they are singing some Mexican tunes really giving it a nice feel. Across the road to the street I stumble across a a super cheap taco place for only $1.50 that are so good and it is run by two Spanish ladies as part of a church courtyard and some people are going into pray. Next to the stall there is a shop selling all the Jesus figures nailed to crosses, huge statues of him and lots of Jewelry with crosses and Spanish bibles about. A very local shop.

After the taco quick fix I cross over to the main square in the Le Pueblo and there is a big salsa dancing gig going on with a band playing and a lot of the older Spanish ladies getting carried away dancing, which is fun to see. Some of them are very good dancers also. So picking out a few other places to head too and making the most of google maps, I try and head more in to town and again start walking on roads that have no people on them. It may for this area that it is because it is a Sunday and usually would be full of workers as pass all the county courts, criminal courts and town hall.  There is a nice grand park I pass, but it has a lot of homeless people hanging around even washing their armpits with a dirty top so it gives it a bit of an edgy feeling as it is sunny out and no-one is there.

I keep walking and end up eventually at Broadway and come across a cool old theater showing “To Kill a mockingbird” and looks historic. There is a info sign saying that is used to be called the million dollar theater as always was expensive and was showing all the hollywood films.  I don’t walk too far down broadway, as sun is starting to set and I don’t want to be downtown when it is dark. But I stumble across a Grand Central Market, which is a really cool place to go with a few friends for food as has every type if food you can think of even with a grocery store in it. There are tonnes of people here as a lot of the places have long ques and it is so weird walking around LA with there being no-one then lots of people. You really do need to know where to go. I buy some nuts (unlike oz and NZ) as they are cheap here and am tempted by all the candy choices and the roast and go place, but still full from the tacos. There is also a champagne bar here and I can imagine before the theater people come here for drinks or after work.

After leaving the market I try to steer myself back on course to the station and to find the Walt Disney concert hall and broad museum. So the route back takes me via The Last Bookstore which is well known and people spend ages in there looking at art they have up as well as being able to exchange books, CD’s etc. At the end of the road there is a urban market on, which is only hosted once a year and selling unique branded stuff like candles, t-shirts, wooden furniture and beauty creams.

So after all the cool markets I found, I eventually get to Grand Avenue, which is where the Walt Disney concert hall, broad museum  and music tour places are. Also it is the main entrance for Grand Park and it looks much better from this end as has a big fountain and you can see the city town hall that looks cool – a bit like a mini empire state building. It looks very looked after in this area and safer as more people about. The buildings here are quite modern and cool to check out. Grand park holds events sometimes, a bit like Hyde Park and saw that for independence day they are having Bloc Party play which would be cool.

The walk back again starts being just me and the homeless. I actually even stop for one guys who gets my eye as looks a bit like father xmas, so I offer him $10 only for him to say he doesn’t take money from people, which makes me feel bit sad. Possibly he has choosng this type of life as looks like was building a home for himself from blackbags and making shoes from them too.

Other cool places I pass on the way back is the Cathedral of our Lady, which I don’t go in but can see it is very popular. The station is then only about 15 mins away and it is funny when I arrive to the station that it is right next to the lovely Spanish village and Olvera street. So means I totally walked the long way around as felt it was far from the station, but in fact it was super close and right outside.

Union station itself is really cool to spend time at Union Station as there is a court yard dedicated to the chairman of the water company which is based at union station. He was famous for building big dam and reservoir projects.  It is really pretty and would be nice waiting for trains and stuff to sit out in the sun here. Again has a very spanish feel to it. 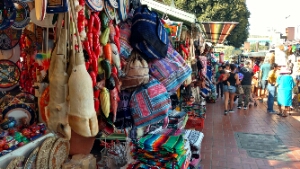 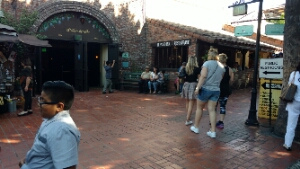 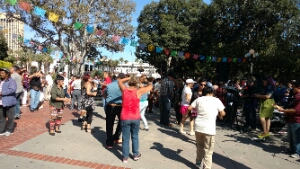 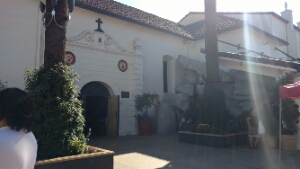 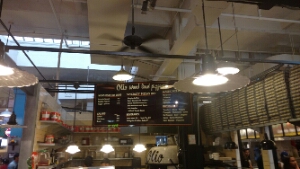 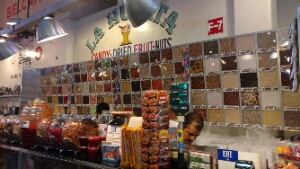