So deciding to head to Vegas overnight on Thursday, meant a slight change of plan was needed due to having to check out in time and get myself organised to leave. Also having a pretty late night after the bar crawl meant that there was slim chance of making the 9.30am hostel shuttle to La Jolla. The extra bit of sleep time definitely much appreciated and means can make some use of the free breakfast too. Some of the others from the bar crawl like Geordie Michael and his brother who managed to get away with crashing in the hostel (noted butt naked though) without paying, I had to leave feeling very sorry for themselves and hungover when I checked out, so a day out sight seeing definitely isn’t what they are keen to do haha. Noticing that La Jolla is only a 50minute cycle ride away and along a nice beach promenade for most of the way, it seems like a no brainer to cycle there rather than try and catch two buses to get there.

Chatting to Klara the German girl, also in my dorm, she decides she is keen to join me for the cycle ride as she was considering surfing with Geordie the hostel guy, but a group of them went to a better surf beach called Black Beach further up from La Jolla when they did the hostel shuttle run so will be gone awhile. And at only $17 (£10) for half a day cycling it is pretty good value. Hiring them from across the road at the surf and skate shop, being served by a total character called Todd who doesn’t seem to have much clue what is going on even giving us a price then asking can he change it and charge us more – doh! Harmless enough though and once we are all signed up, off we go along the beach to try and figure out how to get to La Jolla.

The bikes are interesting as no brakes since the pedals going backward are the breaks and there are no gears, they take a little bit of getting used to but are fine. We definitely take a few wrong turns along the way and takes us a little while to figure out we need to go across the huge big bridge, since the San Diego river is in the way and that is one of the more tough parts of the ride as it is generally very flat.

We ride mainly along the road until we get to the big Mission Beach old amusement park (BELMOT PARK), which comes with its own wooden style coasters so very old skool. Once we get to that point and spot all the restaurants towards the beach, realise we can cycle along the bike path all the way along, which is really nice as can people watch along the beach and check out the very expensive houses along Pacific Beach. I expect a lot of them are holiday homes and am quite jealous at the people sitting out front just relaxing and watching the waves on the beach, a daily occurance for them and something I hope to be able to do one day!

We follow the path all along for about 20minutes, before having to turn back onto the road again, but at least the roads have cycle paths so feel safer. Even if the path is in the middle of the road rather than at the side where you usually expect them. Going along the road it is tricky to know when we have reached La Jolla, especially when you start seeing shop signs but there is no access to the beach. La Jolla is famous for sea lions apparently and for being the expensive part of town. We don’t manage to find the sea lions sadly, but do cycle along the most amazing roads with huge and classy houses. Some will have sea views also.

When we do find a nice section of the beach with some cool rock formations and view up and along the whole of the coast, we stop for a bit to check it out. Annoyingly it is a very grey day (still warm!) so nothing looks quite as pretty, but still interesting to see. But finding no sea lions and unsure where next to cycle too, as both feeling a bit tired now since some of the roads around La Jolla are quite hilly, we decide to head back to Pacific Beach and grab lunch and a drink as all the cycling is thirsty work!

Parking up the bikes and walking up the promenade a bit, we find a cute bar called BAJA BEACH CAFÉ and we are a bit before happy hour, but they usually do a 2 for 1 on the biggest margarita glasses about the size of your face. Not that either of us really wants to drinks too much anyway, after the bar crawl, but they do look tasty. Opting for a safe cider instead and nachos it is a really cool place to hang out and watch the people along the beach, as get a good view of the pier too. We stay for a good hour or so and it is a busy spot, I think one of the bars in the evening that turns into a mini club too.

Once we have the energy again to leave and cycle, we pass quite a few interesting people on the promenade all getting ready possibly for 4th July wearing stars and stripes everywhere – even an older guy with a USA bowler hat and matching shorts. We realise after cycling pretty much all the way back to where the big mission beach amusement park is (BELMONT PARK) that the promenade continues much further down and passes a lot more nice restuarants and outside bars. However what I didn’t realise, although Klara did but we still explored, was that following to the end of mission beach gets you to a dead end as it is surrounded by water and no pass across to Ocean beach unless you go back in and over the bridge. Adding an extra 30minutes on, it’s not too bad as a flat lovely cycle ride as the beach is nice – it is just a bit tiring as already at this point cycled about 18miles! The mission beach area (where Sea World is also) seems to be a total family area, with a lot of BBQ’s and picnics going on plus a lot of small boats and paddle boards out on the lake area surrounding it and what we have to cycle around.

So by the time we do that and have the last hurdle of the hill across the bridge, we both are totally ready to give the bike back and actually make it in just the nick of time only being about 5-10minutes over the 4 hours rental time. We take a little bit of the long getting back once on the ocean beach side cycling right along DOG BEACH and along the beach, when we easily could have just followed the road along but I guess good to make the most of the sunshine that decided to put his hat on for the last couple of hours.

Eventually back at the hostel around 5pm, the rest of the evening is spent just relaxing around the patio area after a nice cold shower waiting to leave for vegas. Deciding to get a shared uber at a bargain price of $5 instead of two buses and having to lave at 6.30pm rather than 8pm with a cab, it is nice being able to make the most of the hostel and chat to some new people all interesting and actually would be keen to stay longer, but have the 4th July deadline and even sader the deadline of having to leave and end my trip in general. Of course still in denial and a last few days in Vegas to be had, there are better things to think of.

So by the time it comes to leaving, of course my uber decides not to work so luckily Geordie Michael helps me out ordering one on his account as otherwise I would be stuck. The only problem with uber is relying so much on data and wifi! Definitely going to be a problem in Vegas, since I have no data due to it expiring and would cost another $70 to renew. Not worth for 5 days.

So farewell San Diego it is sad as Ocean Beach and the USA HOSTEL a very cool place to hang out and great for thinking and clearing the head. The uber is really quick only taking 15minutes, so at the Greyhound coach in plenty of time. And it is only a tiny station so no real chance of missing of it, however it did leave exactly on time. So not one of the most comfortable journey’s by far, especially as the guy next me wasn’t too pleasant plus had hot air blowing on my for 7 hours, luckily after having a few vinos at the hostel Im tired enough to sleep a fair bit. But arriving at 5.30am and having to kill 2 hours in the GOLDEN NUGGET before HOSTEL CAT reception opens is not much fun at all and by the time I do crash in the bed (thankful for early check-in) it is the nicest feeling ever. Not something to get too used too however as need to be and out by 12pm for the first of four pool parties across this crazy last weekend. Joey from Bali is already here and seems keen to go out, so need as much energy as possible. 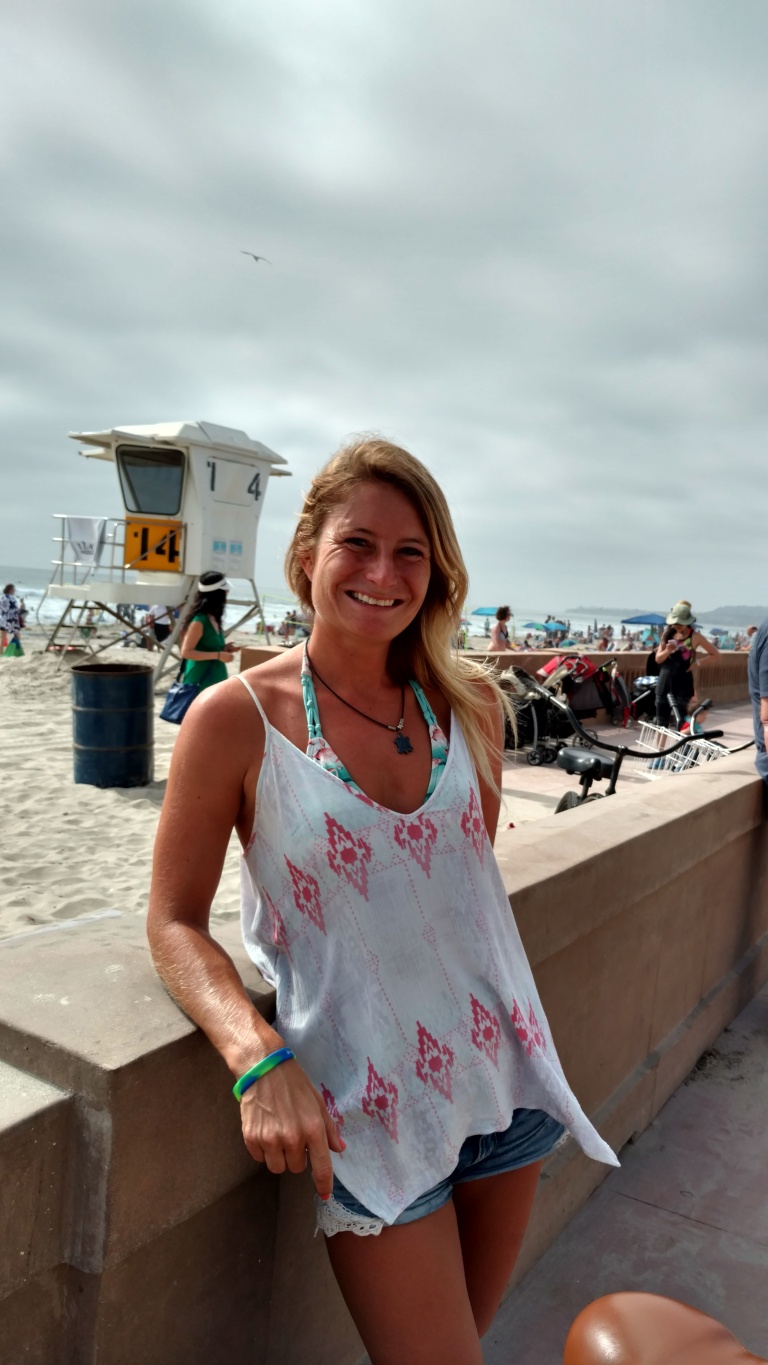 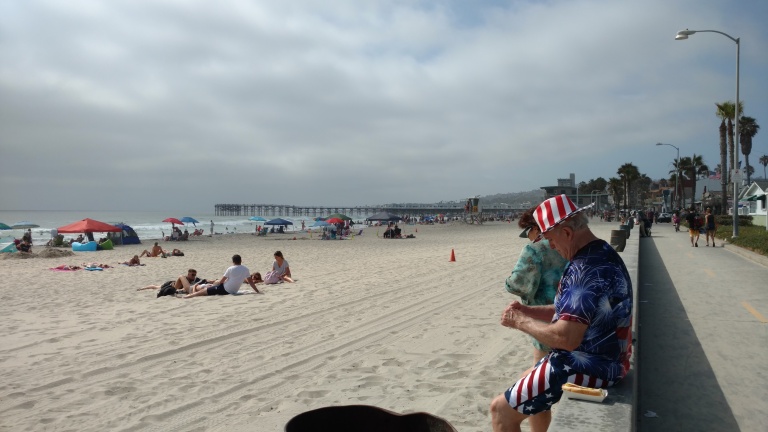 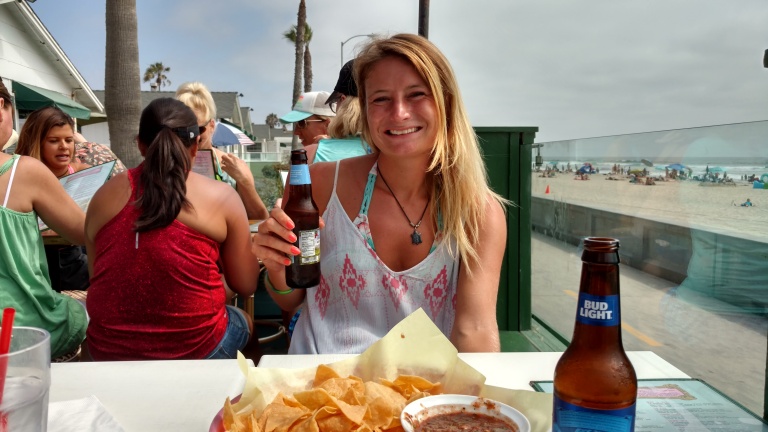 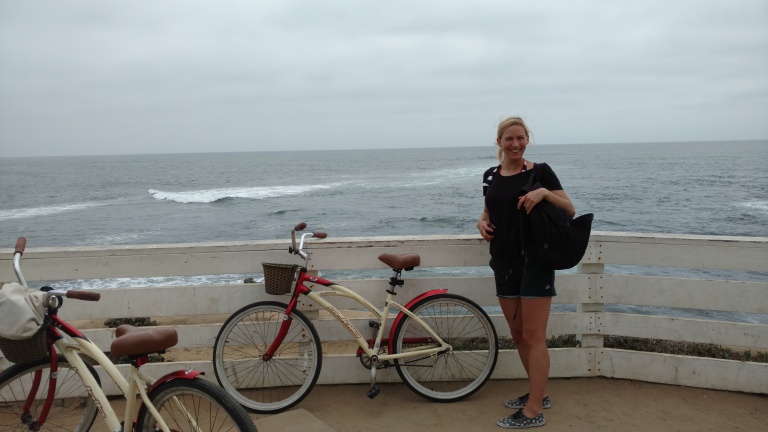