Moving just across to the island opposite Wayalaila , so a pretty easy transport day just hopping on the boat then straight off again. Starting the morning well, as up at 6.30am to catch the sunrise by just opening my bedroom door. Since I have the 6 bed dorm all to myself there’s no need to worry about waking others up. It’s a good one with pink sky so think the weather will be good. For the next hour just chill in the room enjoying the view before heading to breakfast, which is really nice buffet of fruit and pancakes although the fruit is limited as apparently after the cyclone the supplies have been poor due to lots of crops being ruined.

The cross over is quick and painless literally just hopping on the boat and across to the Wayalaili boat. Kiwi bus Chris is also staying at resort as one of the overlap places; which is cool as cool to see a friendly face. Travelling with his mate Ben he seems nice too.  Checking in is the usual Fijian style, very welcoming and always say they are happy for you to visit their village. Always very humble. The dorm is quite good, considering it is one of the Eco lodges so more basic than some. It has a shower and toilet ensuite and just 6 beds all with mosquito nets luckily. The dorm that Chris and Ben are in isn’t the same and is slightly more budget as bigger with about 20 beds and no mossie nets and outside shower/bathroom. It does make a difference being on a 2 Coconut Bula Pass where you just island hop vs being on a Full Monty Package tour as they seem to giving you the lower standard accommodation in exchange for including the activities, which are not really that expensive anyway.

So as soon as have checked in, it’s lunch being served an ok buffet of noodles, rice and chicken in sauce. Not too bad and filling at least. It’s nice the village cooks local dishes. Once lunch is finished they run a special shark feeding tour, as there are 2 english lads missed it in the morning, so that is perfect for me since the next day I am leaving early for the boat to the blue lagoon. And only at $45 (17GBP) it is a bargain to swim with sharks. The boat ride out is about 20-30mins until we hit a big reef which also has a few waves as the reef is very shallow.

As soon as we get in the water we see a couple of reef sharks and as usual so graceful just swimming about really close to us, especially when they are over the reef. Some of the boys as they get more confident around them start diving down and trying to touch them. The sharks are more scared of us and just quickly swim away when they do that. Such beautiful sharks and great to get so close. They are about 1.5 meters long so quite a fair size, but nothing like the bull sharks which can be 3-6m long and really wide.

Our snorkel guide a guy from the fijia village is an amazing fisher and is holding a spear to use for catching fish under the water. he catches quite a few and keeps it at the end to entice the sharks over and feed them. Most don’t take any notice and wait for him to drop it down into the reef corak where they will get it. At one point after he drops the food, there is one very eager shark wiggling under the gaps in the coral to get to it and really pushing his nose into the rocks to get it out. he is then joined by two more. who are not as keen but together the three sharks look very cool together and again just literally underneath us.

We are in the water a good amount of time, probably 45 minutes and in that time the guide is catching so many fish and also drops his spear a few times, so very impressive when he has to dive right to the bottom of the ocean to pick it up as its a good 10m down so you need to hold your breath for ages. Once back in the boat the guys are doing more fishing and catch some big fish on the journey back, which is for dinner. It is great to see the everyday life of the Fijian’s. Not a bad life really – very simple! 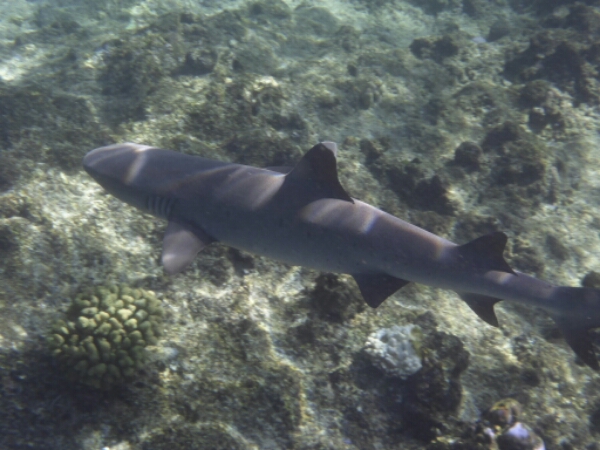 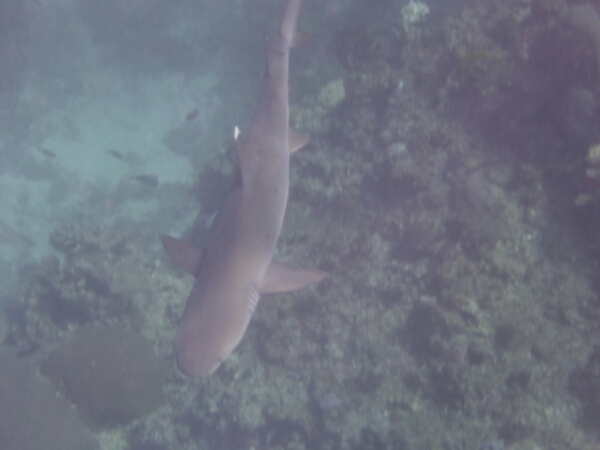