So after the shark snorkel, its time for afternoon tea and biscuits. The 2 english lads need to head off to catch the afternoon boat as going to Bali the lucky guys.  The plan after tea is to do a hike to the Wayalaili Peak, which is guided and is meant to be a little strenuous taking about hour or so. However just as we all get ready to do the hike, it starts to really rain heavily and with it not looking like it will stop the guide has to cancel it as too slippy and dangerous. It is a real shame as the views are meant to be really amazing seeing all of the other islands and I think it is one of the highest peaks in the Yaswara islands. There is an option to do in the morning, but as the boat arrives at 11am it doesn’t leave too much time as return is about 2-3hours depending on how quickly you go.

One of the girls an Argentinian Mari Scandura, who is really nice and great fun does the walk the next morning and ends up at the other resort on the island and totally in the wrong place when the boat arrives, so the local village at the other resort has to boat her back round to get the ferry. So nice of the Fijian people and always looking to help, but shows how easy it is to take a wrong tour with the walk and why guided is much better to do, especially as it really costs nothing and supports the village.

So as the afternoon is a write off with the weather, which continues to rain for the rest of the day, we end up getting some cards from a Scottish guy Owen from Perth who is in my Dorm. So along with Kiwi bus Chris and Ben and Mari the Argentinian girl we have a fun game of contract wist, with me leading all the way until the end and loose out to Ben. Its a good game to play on rainy afternoons as it has quite a few rounds so lasts awhile.

By the time that finishes it time to change and shower for dinner, which starts early around 6.30pm. Another buffet the food is nice and after dinner the chief of the village speaks to us and invites us to play some games after they sing welcoming Bula songs to us. Before the games we all have to get in groups of where we are from, so that we can sing our national anthems. With about 40 people there a mix of countries it is cool to hear the different ones. We start and it is Chris and Ben mainly leading the way for the English anthem as I hardly know the words – just the key ones.

So the games are quite good fun and we have a few like Tom and Jerry, where we have to stop the cat (Tom) coming into the circle as the group all link arms and if he does then let the mouse (Jerry) out of the circle to escape. It gets quite physical with the boys trying very hard to push and battle there way through the linked arms. When I do it I don’t last long at all haha. Other games are piggy back racing which I’m paired up with Chris as well as baton passing linked up together having to change directions when the chief shouts and aim is to not be left with the baton when the music stops. We finish with learning the Bula dance, the Macarena and musical chairs.  All good fun, but by the end we just want to chill and have a few drinks.

So rest of the evening with the group as it is quite large, play a few of our own games where we all have to have a sign of some sort and when our sign is done by someone else we have to then play and choose someones else sign to get them to play – so one of the German guys does a stand up wave which is hilarious every time he does it. We also do this with silly bird noises and impersonations, the best one being the Owl by Owen. We also play Zuma Zuma (Shimmy Shimmy) a classic game which I also played a lot in Halong Bay. It’s a great game to get everyone going as the “Shimmy Shimmy” gets loader and loader the better everyone does in the round. Very amusing and keeps us all entertained for a good while.

While we are playing the games the local Fiji guys from the village spend the night drinking the Cava and it is funny to see how mellow they all get – very chilled playing the guitar. One of the guys called Dora who works on the Kuta island across and was talking to there gives me some of the Cava, which really doesn’t taste too nice as just muddy water. i think for it to have the same effects as the locals you need to drink a lot of it.

Playing the games with us is also a local from the village who is very funny and lively despite just drinking a bottle of coke all night. We find out as the night goes on, along with a guy called Thomas that they both do magic tricks and are really good. They do it on a few of us and get it right everytime, usually pretending that they have mucked it up and failed along the way only to then produce the card someone has picked. A nice way to end the evening with a bit of magic and as it is only a few of us having beers, we stop playing the games around midnight so to keep the noise down in the village. 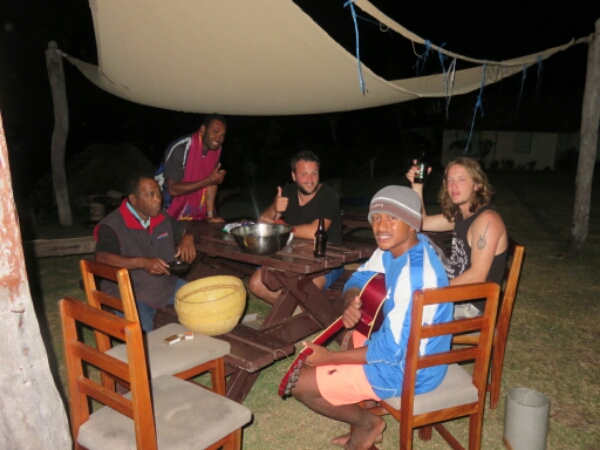 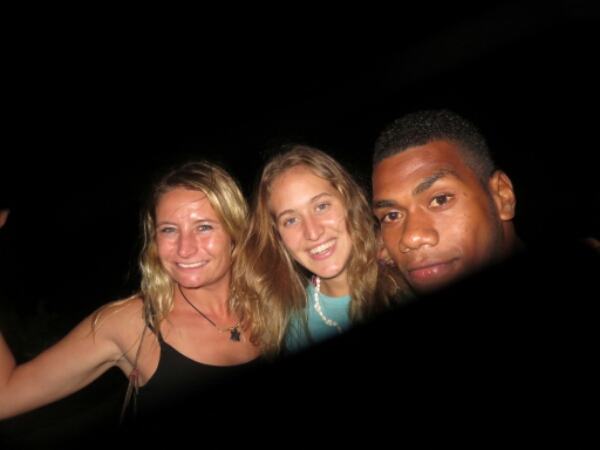 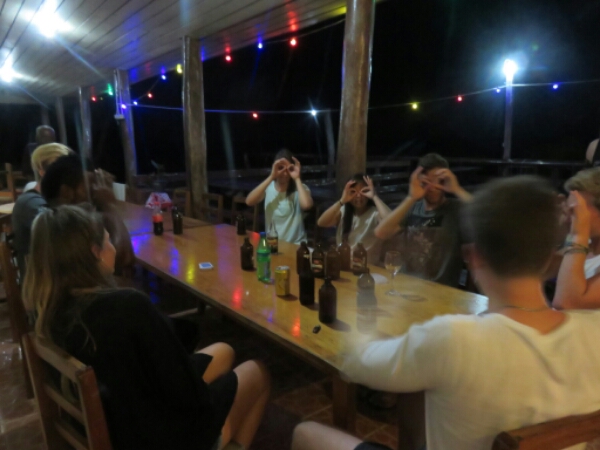