As part of the Active Tropics Cape Trib Tour a night walk through the forest was included and is a nice group of people, only gripe being the size of the groups is a little too big to keep everyone together. The main guide is quite fun ozzie dude and likes to be cracking jokes all the time, but he also knows his stuff and area super well.

There is an older english couple on the tour who seem to have a natural talent for spotting small things, such as crickets, spiders and frogs! I manage to spot nothing I think as I am concentrating so hard on the walk making sure I don’t kill myself along the way by tripping up or walking through a spiders web as there are plenty.

The most interesting spot from the tour is where we see a Huntsman spider feeding off a cricket, as it looks very gruesome with the antennaes still moving and the spider totally smothering it. The walk is cool going through the forest at night, but I think due to the rain we don’t see many things out.

Other interesting finds, is a huge big web in the shape of a funnel, where the spider has stolen to use for her eggs. It is one of those webs you would’t want to see walking along an ending up with your face in it – eek!

The last highlight of the trip is having to squeeze through a hollowed out fig tree, which we also get to see again on the tour in daylight. It is pretty cool to be able to look up into the middle of an empty tree with it all twisted round, with some of the girls passing as get too worried about spiders but there are non. It’s a great feeling walking around forest in the dark, especially when it is pitch black apart from your funky flashlight that has 3 meetings on it. 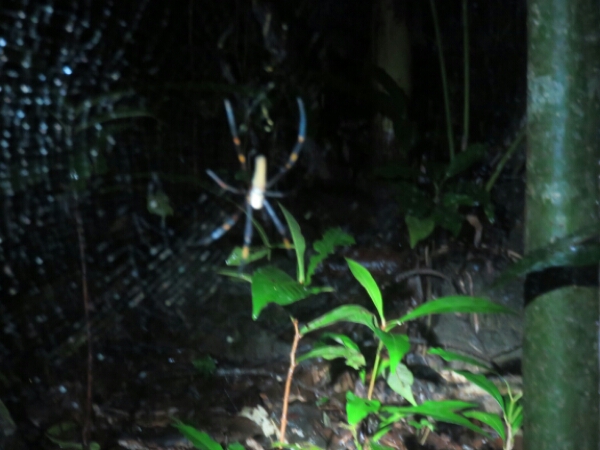