Afternoon we arranged for a driver to take us to a couple of temples further away as got a great price of 300k (£15) to go to Rocky Temple (Gunung Kawi) , Holy Water Temple and Elephant Caves.

Rocky Templetemple is really cool and super old being 11th century with stone carvings which were for the old kings when they died, so have to wear a sarong to cover your legs to be respectful. It’s nestled within rice fields so nice scenery but quite a few steps so in the heat is bit of Killer plus the constant “no” we have to say for the local stalls trying to sell their handmade things.

The Holy Springs  are next and this is where the local Balinese go to what looks like baptise them self and family. It’s really busy with someone at each water fountain. One family a baby is having water on his head at each and his granddad is collecting water in bags putting in the mums basket I assume to do at home. The rules for entering are strict and must be covered, not on period for ladies, hair tied back and not go in wet dress to the other temple. The Bali look very passionate about it so Holly and I don’t feel right to go into the water ourselves although it looks lovely with the elephant statues surrounding it and super clear and clean water. The actual temple isn’t so big but nice to see and it’s center is a huge pond of water which has a hot water spring from one of Bali’s many volcanoes in the middle pumping out black minerals maybe as several swallows fly in a circle around it occasionally dipping down to drink from it. Really mesmerizing to watch so many birds in one place fly about wild.

Last stop is Elephant Caves which aren’t quite as impressive as Rocky as only one cool statue which is guarding the cave entrance and looks quite freaky actually with buddah faces carved in that look like they are trying to escape out of the wall. There is also a large angor wat style tree with huge ancient roots that is interesting to see here. Apparently the whole site was only extravated in the 1950’s which seems crazy as it is 9th century.

So head back to ubud after the temples and go straight into town for happy hour drinks. The weather been good all day – hot and sunny but just as we leave the temple it hammers it down with rain and is ongoing pretty much most of the night, so don’t venture too far and have happy hour mojitos and gin in Oops Bar.

As we are about to leave I spot the 2 girls who met in Mui Ne with George the night about 15 of us from backpacker village went to dinner. So we end up staying and having dinner there, which was really nice food and having a good catch up with the girls for couple hours. On way back we think we are lucky as no rain, only for it to rain the heaviest its rained all day. We sit under some cover to see of will pass,  but in the end have to go for it and know we can have nice shower in the cool outside rain style shower’ which surpringly is bug free! 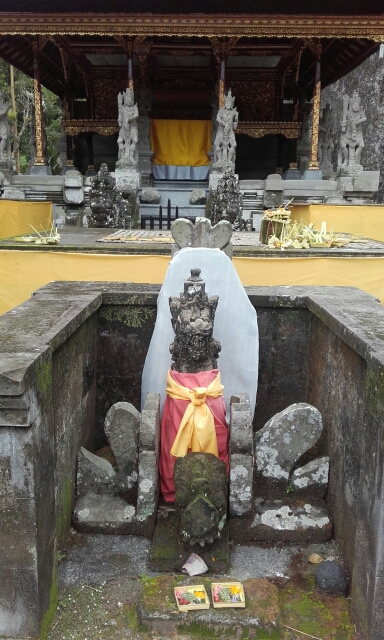 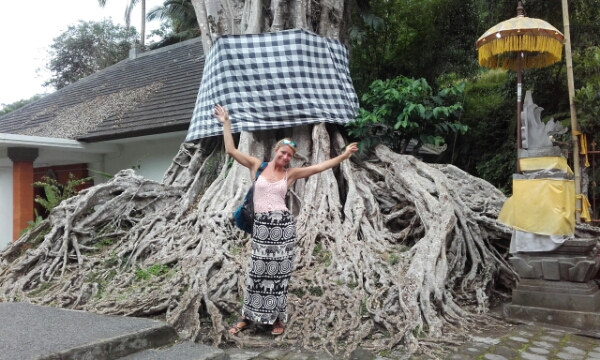 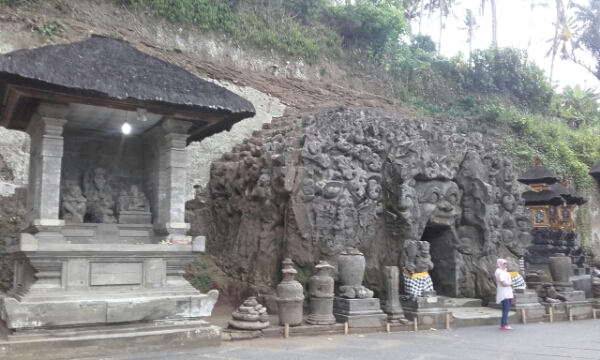 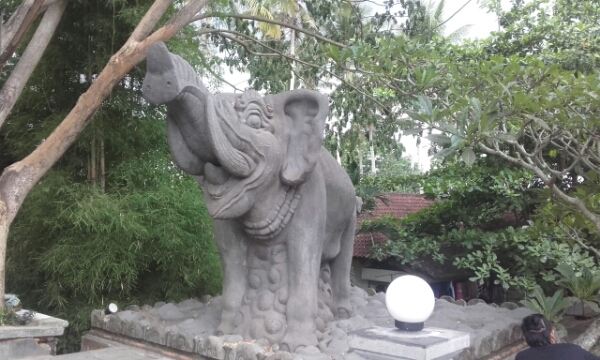