So I don’t arrive back to the hostel until late after catching up with Adam and Anna in Universal and for dinner, so not had a chance to really check it out too much yet but seems nice. Good rooms with sockets and shelves in the bunk beds and nice bathroom. A nice atmosphere too and there are a few people sitting outside having a few drinks and chatting, so join in for a bit as get chatting to a guy and his mate from new York and two kiwis Harrison and Sean who all seem quite fun.

DAY 2 a Thursday in Hollywood is a chill day and hostel switch (so I can compare as was recommended by Fiji Nev), so hanging round the hostel in the nice loungers they have. Most of the day is quiet so can crack on with stuff, but evening gets bit more lively with quite a few new people turning up. End up chatting to a Sheffield guy called Toby who is cool and travelling solo, so mention about keeping in touch after have moved hostels in case the activities better. Once it’s cooler about 6pm I head to BANANA BUNGALOW for few nights and it takes about 15min walk. Taxi easier as bags heavy, but means I can check out the area better.

First impressions is that USA hostel is smaller and nicer layout as this is an old hotel so feels less welcoming. But the apartment is cool with a kitchen and big bathroom and hallway. Like a little flat just a little older. There are two young ones- only 19 staying – who are cool to chat too but finding LA hard with the drinking limit. So tonight there is a blinged up bus dropping people to some bars, but it turns out it is just 3 of us and it is actually the bars are opposite where my previous USA hostel is. So recommended an old speakeasy bar called NO VACANCY the 3 of us try that but one of the lads is wearing shorts so needs to change. Not wanting to go back I meet up with Toby and go to the hostel for drinks catching up again with some of the guys met previous night. We stay drinking there for a bit then telling them about the speakeasy a few are keen to check it out so we head there are super close to the USA hostel. Their location is much better. The bar is really cool with a secret entrance of a bed with steps downstairs uncovered when the lady in the bedroom slides it over. The room is cool and looks more like a 1920s brothel. The music in the bar is chilled and funky and it is a classy joint. Drinks not too much with wine only $8 and nicer drinks great value at $10 as a very good serving of alcohol which is unusual. Toby suffering from jet lag heads after half hour, but the kiwi guys Harrison and Sean stay until the end when it shuts at 2am. It’s very strange for such a big city to stop serving so early and think it must be from the prohibition days what with the 21 age limit too.

DAY 3 is a trip to the Griffith Observatory and then at the BUNGALOW hostel as it is Friday doing a BBQ drinks and then a ride to a club called BOULEVARD 3, which is really nice with outside area and feels classy. Sam the 19 year old manages to get in it by using one of the older guys Fran driving licence as he has two and both have dark hair, although he is Spanish which Sam doesn’t speak but the bouncer doesn’t ask anything. It’s a good night and hang out with some cool new people and chill out after in a function room they have. Still after this think USA hostel is better and will switch back Sunday.

So using the next day as a chill out day as I don’t have to check out and so hang about the hostel for bit to use the computers and then head to La Brea / Santa Monica to look for a new phone as dropped it at the observatory into the toilet as it was in my back pocket. Not much water got it into it, but enough for the touchscreen to stop working. Needing another one anyway for when im back home as the Samsung too basic for ongoing use and my iPhone has broken. Walking there takes about an hour but nice in the sun. There is a best buys and a few other shops, where I can puck up few small bits that will fit in the backpack. They don’t have much choice for phones and about to buy the Samsung 6 I find out it doesn’t have extra memory card space so no good for and all my pics. So the best choice is a Motorola Pure that is leaps better than my old phone so happy. Getting a bus back as too far too walk I spend some time checking out the hollywood shops and Chinese theater. Not really much there apart from lots of famous hand prints, but good to say have seen it.

By the time get back it is late and with nothing happening at Bungalow I meet up with Toby and his pub crawl, which is good but nothing too crazy. The bars are very hiphop and so is a club we go to called PROJECT, but it is still fun and not too heavy that we can’t dance to it. We meet some interesting people there for sure and I loose the guys at the end so end up getting a lift home with two girls from the area as they said too dangerous to walk alone, which I can believe as Hollywood def full of crazies. 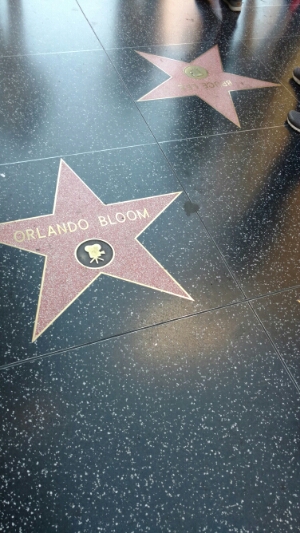