So an early start but not too bad and wake early as going to bed so much earlier and not partying which makes a change. We are meeting at 8am and so have time for a quick wander about and to apprecriate the beauty of the forest and it is all misty this morning as the sun rises, which makes it feel very magical and something out of a film. Wanting to walk more I have to head to breakfast which is at 7.30am and is another 4 courses of toast and danish, pancakes, poached egg and fresh fruit. A good start before a long trek and good to know can walk it off as feel so full. So we need our leach socks again and a walking pole as its uphill so feel all geared up ready to go. The first part is quite easy and mostly flat with few steps going up. All the paths are very natural and steps are mostly the tree roots with some wooden boardwalk or rope been put in by the lodge just for safety. Aswell as concentrating on treking through the jungle we are also wildlife spotting and until about a quarter of way through we just see the Pittas Bird and then we see some grey monkeys and Henry thinks they are macau but then spots Gibbons as we could heat their call this morning. They are racing through the trees and are huge jumpers super fast so its really cool to see them so wild and they must clear about 6 trees before we loose them. Henry tells us it is a rare thing to see them which makes it even better. So all quite eager to see more, christian sees a lot of branches move and stops Henry. At first he thinks its nothing, maybe a squiral but then spots its an orangutan. Looking through my camera I can see its a mum and baby and manage to get quite a clear one before it hides in its nest.

The rest of the trek is going to an old coffin and buriel site right at the top. Its an old tribe burial and there is some bone pieces. At the top there is also a viewing platform where can see the lodge and sheer size of dannum valley as so big. Its pretty warm and was a hard walk up and think going down will be easier however its really slippy in the mud parts. Most of the journey has natural route engrained in path using the tree roots as steps a lot which is cool. Especially the steps going up to viewing platform.

On way back we pass a few of the waterfalls, one is called fairy falls. There are so cooling and quite powerful and just want to jump in with them. We go to the jacuzzi fall which you used to be able to swim in but due to a landslide can only put feet in which I do and feels so refreshing and nice to get the leach socks off for bit. 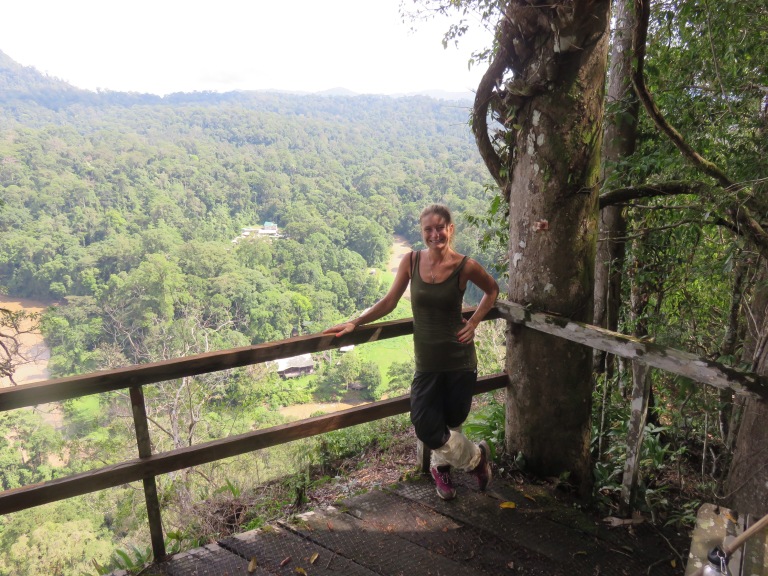