Today is the Tongariro Crossing After our nice chilled night it isn’t too hard to wake up at 4.30am to get ready for the crossing pick up, although there are handful of people who don’t make the bus and have to get the later one, which means they probably won’t be able to do the extra walk to Mount Doom. The drive is about 2 hours and mostly everyone sleeps as its dark. Once we are there the sun is just rising and it looks pretty spectacular coming up over the mountains, which all look beautiful and high. With the whole bus doing the trip, it’s a really nice group to do the walk with and for the first hour it’s an easy walk just flat right up to the part that is a challenge called the devil’s staircase.

So enjoy the flat walk, as it’s very scenic passing the mountain ranges and use this time a little to powerwalk to make up time so that I can stop when needed on the harder parts and not get too far behind the others. There are time limits for some of the parts, where it says that you must leave no later than X if you are going to attempt it – the summit (aka Lord of the rings Mount Doom) being one of those with a 9.15 am limit.

It doesn’t take too long for the sun to come up and probably walk in dark for the first 45 minutes, which means it is really cold when we start and have to wear all of my layers I have brought and even consider hiring a jacket from the tour company, but decide that my 2 hoodies and 2 tops, hat and gloves should be enough.  It doesn’t take too long to warm up and by the time the sun comes up everyone is too hot and taking the layers off. The weather we are really lucky with as is a totally clear day, no clouds and sun so means the views will be amazing.

The devil’s staircase is quite steep and tiring, but not too bad and it says that if you manage this part ok then you will be Ok to climb the summit, so a big group of us decide to go for it with a few of the girls deciding not too after trying it a little. The views already from the top of devil’s staircase are so beautiful and climbing Mount Doom is just one of those bucket list things to do, so I decide that it’s a must and start climbing. It’s a crazy thing however when you look at the route ahead and just how steep it is, as there isn’t even a proper walk way it is just rocks and gravel.

To start with you can walk and climb, but as you go further up the only way to climb it is on your hands and needs as it is impossible to get grip with every 1 step forward it feels like 3 steps back. Thankfully I bought gloves in Taupo and at a bargain price of $4, as I have to claw up grabbing rocks which some are bit sharp, but mostly they are just round lava rocks. The scary thing about the climb is as the rocks are so loose they fall down as you try and get grip and quite a few times have to watch out for rocks coming in your way, with some of them going so fast rolling all the way down and being big and all you can do is shout “ROCKS” and then everyone else below you shouts too to get people to move out of the way, which isn’t the easiest thing when you don’t actually have anywhere to move to. Sadly one girl wasn’t able to move in time and with probably the largest and fastest rock that fell that day was knocked out by it and the rescue ambulance helicopter had to take her away, so makes you realise just how dangerous and serious you need to take it and appreciate your fitness levels just taking your time going up so not too fast to dislodge rocks.

With the Mount Doom climb feeling like it was never ending looking up still not being able to see the top, but already been on it for a long time it does get easy to say you want to quit. But looking behind me and down, it looks just as hard to go down if did decide to turn back as there is an easier route for us all to come back down on. When I look back I can see a group of hikers right in the distance looking far away and because the steep up gets so slow the further along you go, before I know it when I look behind me they are right on my back and so let them all pass giving me rest time and not wanting to hold anyone up.

The feeling when you get to the top is amazing, however there is a ledge just before the actual top that is flat and when you are lower down you think is the top. A good place to rest and grab some food and take in the amazing views, you have to be careful not to spend too long there are it just makes the last bit of the climb too hard as you relax too much, but it is easier than the previous section as the rocks are much bigger so you can get some better footing. It’s just a bit scarier as you are so high and to get to the rocks you have to move about more to the left and right so the vertigo kicks in.

So eventually getting to the top, the last in the group of the boys and the 2 Swedish girls the view is breathtaking and actually can’t believe am up the top of a volcano. The crater just behind me (which I struggle to turn and face as it is so narrow) is really cool with the colours and rock formations. You can walk along the top of the crater, but it’s too narrow for me, so I just sit and enjoy my lunch taking in the views with the group.

The route down is also very hard and uses completely different muscles to going up – much more pressure on the knees as you have to dig you heels into the gravel to get grips and practically slide down.

There is a ski run that is recommended as the best route down, but getting to it isn’t fun and more or less slide down on my bum most of the way to the ski run start, which is warm gravel and has steam coming from it proving just how active it still is. At the bottom they do have info on what to do if it starts to erupt, so a thought I really don’t want to consider when I’m on it. So it feels like it takes forever to go down and I do it slowly a lot of it on my bum then sliding the trainers just end up full of rocks and gravel – I can understand know why it suggest ankle hiking boots as you need that ankle support and tough boots for this. My little trainers taking quite a beating. Some people in the group manage to do it much quicker, like Welsh Alex who practically ends up running down it  luckily safely and injury free.

So down and safe on flat ground it is the nicest feeling. Meeting up with the group we sit and eat rest of our lunch and just looking at it what we just climbed it seems surreal that we all just came from the top of it (which you can’t even see properly it’s so high). The next part of the walk is easy and flat and nice break before we have to do some climbing again. Not as steep and tough as Mount Doon, but doing it straight after doesn’t help. There are some ropes on this part you can use to help pull yourself up so that helps and it’s just a few frequent rest stops needed for this. The views are amazing again and seeing Mount Doom from afar along with the side of the red crater is really cool. The colours are amazing when you get further along the Red Crater and in the distance can see the emerald crater pools – fluorescent type water that really smells of sulphur, but provide great pictures. The walk down to them is similar to Mount Doon sliding down the gravel, just nowhere as hard or long. After this there is only one last smallish climb before the rest of the walk being downhill all the way through the Alpine areas. We pass a few other active volcanoes with smoke coming out and it’s a nice walk along the edge as can see the huge lake in the distance and the miles of surrounding Alpine land with the path continuing down as a zig zag for ages. This section of the walk in itself takes 2 hours and the end stop is where the toilets are, as there have been none for the past 5 hours. It is really peaceful walking through this part and the sunny clear day makes it so much better for the views – very lucky considering the previous day was cancelled and day before that got stopped half way.

The very final section is 45 minute walk and is bush walk and follows along a river, which mid way is described as a hazard zone as think it can flash flood so tells us to not go near any noises if there is one. It isn’t too hard a walk, some steep bits, but mainly down or flat thankfully and by the time Welsh Harry, Milton Keynes Chris and I get there we are all so pleased. The rest of the group is ahead of us, so we are the last of them more or less, apart from Billy who got lost at the bottom of Mount Doom. Overall so pleased have survived the day and feeling super proud I climbed Mount Doom – definitely one of my best achievements and cool to have done it on Anzac day too! 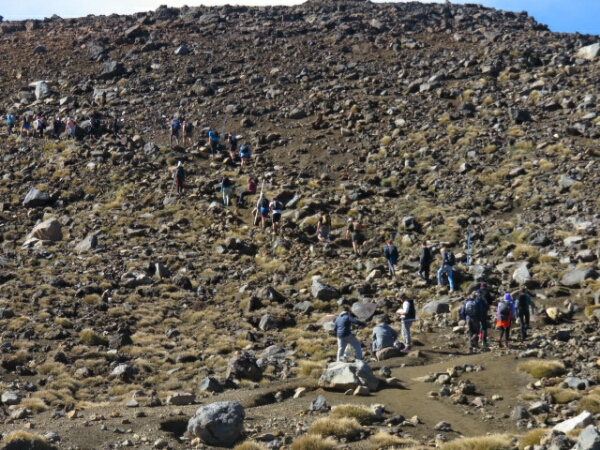 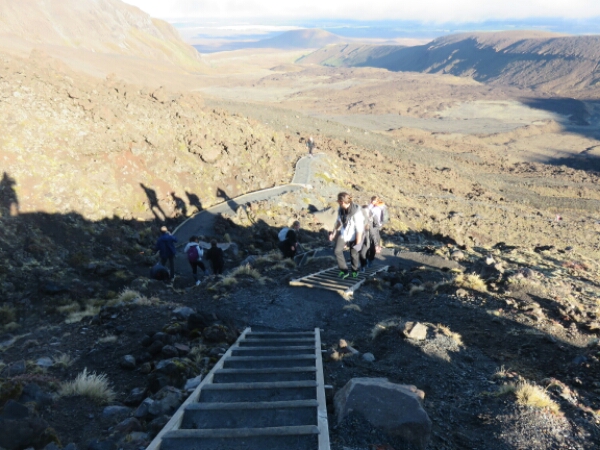 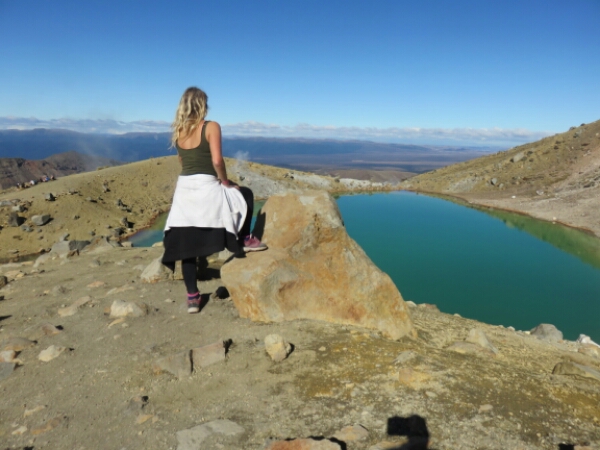